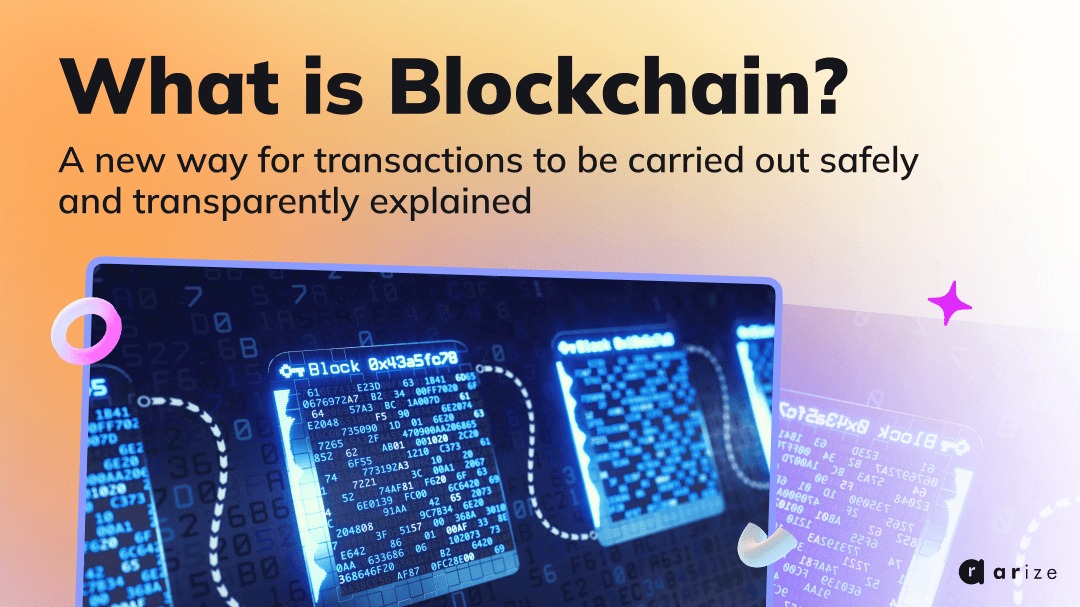 If you want to get involved in the world of cryptocurrencies, NFTs, and marketplaces, one word you are going to come across frequently is the word blockchain. Blockchain allows a new way for transactions to be carried out safely and transparently with no need for third parties. So, what is it and how does it work? Follow us and we’ll explain everything!

Blockchain is a system of recording information that makes it difficult or, in some cases, impossible to change, hack, or cheat that system.

A blockchain is essentially a digital ledger of transactions that is duplicated and then distributed across the entire network of computer systems that are on that blockchain.

Every block on the chain contains several transactions, and every time a new transaction takes place, a record of it is added to every participant’s ledger, meaning changes cannot be made without multiple people knowing about it. This type of database managed by multiple participants is known as Distributed Ledger Technology (DLT).

In 2008, a person (or persons, no one really knows) using the name Satoshi Nakamoto published a whitepaper online that described the principles behind a new type of digital money called Bitcoin – you may have heard of it!

The goal was to create digital money that would make online transactions between people anywhere in the world possible without the need for a third party, which is how transactions are traditionally done. Think of a payment processor like Paypal or a credit card company, these are third parties.

To do this would require a system that would eliminate an issue called “double spending,” where a person might use the same amount of money multiple times. The solution? A network that was constantly verifying the movement of Bitcoin… the blockchain!

What’s so good about Blockchain?

This was not the first attempt at creating digital money, but attempts in the past have always failed, until now.

The main issue with creating digital money is a simple issue of trust. How do you know that the person creating the currency won’t just give themselves millions or steal everyone else’s once they start using it?

The blockchain solved this problem. As opposed to most normal databases, which have someone in charge of controlling the changes, the blockchain essentially has no one in charge, it is run by those who use it. What’s more, cryptocurrencies like Bitcoin can’t be faked, hacked, or double spent, so people can trust in their value.

How Does a Blockchain Work?

Think of a chain, an actual chain with links and everything. Each link in the chain represents a mass of information containing transaction data. At the top of the chain are the transactions that happened today, as you move down the chain, you see older and older transactions. Once you get to the other end of the chain, you will have seen every transaction in the history of that blockchain. It is an open, transparent record of a cryptocurrency’s or an NFT’s entire history.

Trying to manipulate or forge transactions will cause a break in the chain, and everyone in the network will see it and know what happened.

People often also call it a ledger, as, like a bank’s ledger, the blockchain will track all of the money flowing into and out of the network.

What are the advantages of Blockchains?

Here are just a few of the advantages that can be gained through blockchain:

Increased Privacy: Cryptocurrency payments don’t require the inclusion of personal info, which protects you from having personal details stolen from you.

Globality: They are global, which means transactions can be carried out anywhere in the world quickly and cheaply.

Transparency: Because every transaction is published publicly in the form of the blockchain, anyone can look into them. That leaves no room for manipulation of transactions, changing the money supply, or any other type of illicit adjustment.

Blockchain, especially in regards to cryptocurrency, is becoming the biggest threat to traditional finance. Currently, the majority of people’s financial dealings now take place online, and every single transaction requires a bank, credit card company, or payment processor to facilitate it. Blockchains allow for these transactions to take place without those middlemen or the added costs and complexities that they bring.

For more information about ARize, their products and services, please visit http://www.arize.io or contact us at https://arize.io/contact-us/

What are “NFT Games”?

ARize Leave Their Mark in Dubai

What is an NFT?